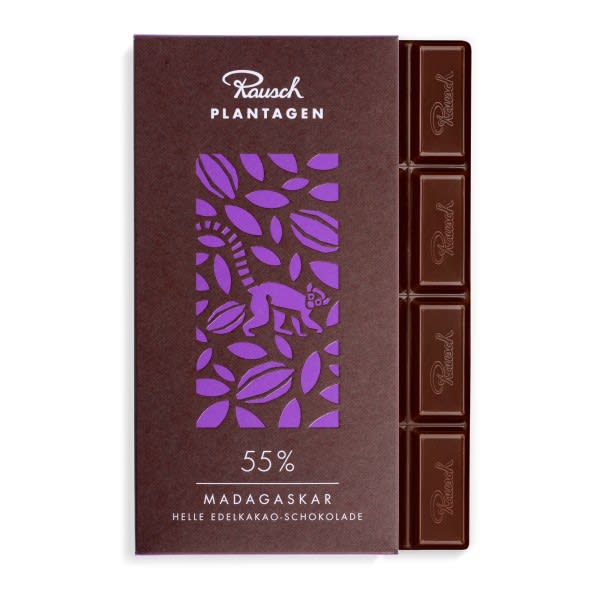 Fine flavour cocoa from the fourth largest island in the world - Madagascar.

Experience very special chocolate moments with the fine flavour cocoa chocolates. Not only in the sustainable cultivation of the best fine flavour cocoa varieties, but also in the further processing, Rausch focuses on highest quality. At first glance, the intense shine and fine structure of the surface can be recognized, which makes the chocolate shine visually. When a piece is broken off, the unmistakable crack of high-quality chocolate can be heard. Close your eyes and let the intense aroma take you to the African east coast.

Fine cocoa cream chocolate in its purest form made from cocoa, cane sugar and cream. Enjoy chocolate in a new way with 'Rausch Plantagen Madagascar 55 %'. Bit by bit, all your senses will be enchanted by this fine melting chocolate.

The individually designed packaging of 'Rausch Plantagen Schokoladen' is based on the tropical countries of origin of fine cocoa. The 'Rausch Plantagen Madagascar 55 %' shows the lemur monkey that is at home there. The look invites you to dream to faraway countries and is based on the tropical areas where the fine flavour cocoa is cultivated for Rausch.

Information for persons with allergies: May contain traces of NUTS. Protect from heat and store in a dry place.

We use cookies to present you the chocolate creations you like. This is the only way we can meet our claim to offer you a convenient shopping experience on our website – for example, through a user-friendly structure and personalized content. You can find more information on this in our data privacy policy.
Necessary

These cookies are mandatory for the operation of the site and enable security-related functions as well as basic functions for site navigation and access to secure areas of the site. In addition, these cookies enable us to determine whether you wish to remain logged in to your profile, in order to make the user experience more efficient for you when you visit our site again.

Session:
The session cookie stores relevant information about your current session across a number of page views, making it essential to your shopping experience.
Wish List:
The cookie allows a wish list to be saved for you across sessions. This means that the wish list will remain in place for several browser sessions.
Device Assignment:
The device assignment serves to ensure the optimum display for the currently active display size.
CSRF-Token:
A cross-site request forgery is an attack on a computer system. The CSRF token cookie contributes to your security. It strengthens the security of forms against unwanted hacking attacks.
Login Token:
The login token is a security-related function and is used to recognize users across sessions. The cookie enables personalization over several browser sessions, but does not contain any personal data.
cache exception:
The cache exception cookie allows users to read individual content separately from cache memory.
Cookies Active Check:
The cookie is used to determine whether cookies are allowed by the site user's browser.
Cookie settings:
The cookie allows the site user's cookie settings to be stored across multiple browser sessions.
Amazon Pay:
The cookie is used for payment transactions via Amazon.
Information about the origin of the user's path:
The cookie stores the home page and the first page visited by the user for further use.
Awin Affiliate Marketing:
The cookie provides tracking functionalities for a successful integration of Awin partner programs.
Partner:
Das Cookie dient dazu über externe Partnerlinks generierte Umsätze zu dem jeweiligen Partnerportal zuzuordnen.
Landerkennung:
Das Cookie wird für das Merken der Spracherkennung im Shop genutzt.
Marketing

Marketing cookies are used to serve advertisements on the website in a targeted and individualized manner across multiple page views and browser sessions.

Google AdSense:
The cookie is used by Google AdSense to enable more efficient advertising on the website. It is used to deliver ads that are relevant to users, to provide more accurate campaign performance reports, or to prevent a user from seeing the same ads several times.
Bing Ads:
The Bing Ads tracking cookie is used to collect information about visitor activity on the site and is used for advertising purposes.
Google Conversation Tracking:
The Google Conversion Tracking Cookie is used to effectively track conversions on the website. This information is used by the site operator to target Google AdWords campaigns.
Statistics

In order to continuously improve our offer and our website, we collect anonymous data for statistics and analysis. These cookies help us to understand how visitors interact with website content by collecting and analyzing information anonymously. This enables us, for example, to determine the page views of our online store and improve our offer.

These cookies are used to present you with customized content according to your interests. In this way, you will be shown offers that are particularly relevant to you.

These cookies make it easier for you to use the website. For example, they enable us to identify if you need assistance and to provide you with customer service via a chat.

Zendesk:
The cookie provides a live chat for visitors to our site. The cookie ensures the function of the application over several page views.
Push notifications:
These notifications are used to optimize targeted communication with website visitors. Through this service, visitors can receive news about offers, product news, promotions and more.